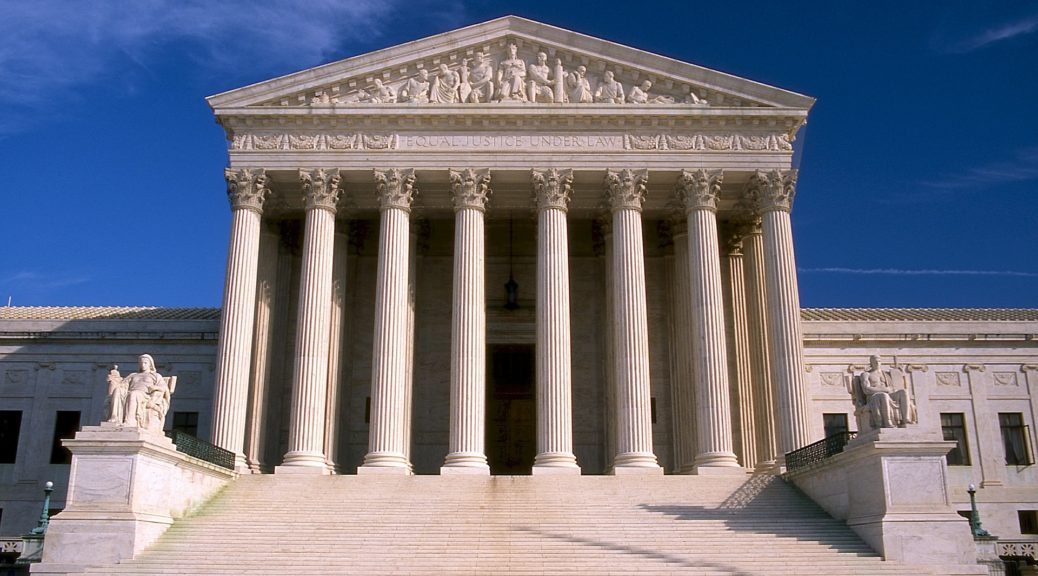 In 2010, Congress enacted the Patient Protection and Affordable Care Act (ACA)[1]. The goals of the Act were to increase the number of Americans covered by health insurance and to decrease the cost of health care. No republicans voted for the bill. Since the Act’s passage, it has come under legal attack from many fronts.

Under the Act, the States were to set up exchanges which listed the various insurance plans and the associated costs. Accessing the exchange website would allow people to shop for a plan that would best fit their needs. If a State decided that the cost of setting up the exchange was too high or for whatever other reason, then the Federal government would come in and set up its own exchange. However, under the law, only the States that had set up their own exchange would have their citizens access tax credits which could help pay for the insurance premiums.

One of the key requirements under the Affordable Care Act was the individual mandate which required most Americans to obtain health insurance coverage.[3] For people who were not exempt from this coverage and were not covered through an employer or a government program, this requirement could only be met by buying health insurance from a private company. The legal issue pertaining to this individual mandate was the power of the Congress to force the buying of health insurance by people who were not participating in this particular form of commerce.

A second important requirement of the Act was to expand Medicaid to help cover all adults with incomes up to 133 percent of the federal poverty level. The legal issue relating to this expansion was the ability of the Congress to force the states to cover several more people under Medicaid or suffer the loss of all federal funding that had previously been given for Medicaid.

The third issue addressed by the Court in this decision was the applicability of the Anti-Injunction Act if, in fact, the payment required by those who did not obtain health insurance was deemed to be a “tax” as opposed to a “penalty”.

Shortly after President Obama signed the Affordable Care Act into law, thirteen States filed a complaint in the Federal District Court for the Northern District of Florida. Eventually, 13 more States, the National Federation of Independent Business and several individuals, joined in the suit. The main issue alleged by the plaintiffs was that the individual mandate exceeded Congress’s power under Article 1 of the United States Constitution.

The District Court agreed with the plaintiffs. This Court also held that the individual mandate could not be removed without changing the law, thus, the whole ACA had to be struck down.

The Court of Appeals for the Eleventh Circuit agreed. The majority opinion of that Court affirmed that the Commerce Clause does not give the Congress the power to force people to engage in commerce. If the Commerce Clause gave Congress that kind of power, there would be no limits on what Congress could do and that would violate precepts of Federalism.

Other Courts of Appeals came up with different opinions. The Sixth Circuit and the D.C. Circuit held that the individual mandate was a valid exercise of Congress’s power under the Commerce Clause.

The Fourth Circuit held that the individual mandate was really a tax. Since a tax was involved, they reasoned that the Anti-Injunction Act would apply which would prevent the courts from assessing the merits of the case until the tax had been collected.

When several Courts of Appeal come up with very different holdings, the Supreme Court is likely to take on the case; that is what happened here.

In the Supreme Court opinion, four of the Justices felt that Congress had the power to make the individual mandate into law. They agreed with the Sixth Circuit and the D.C. Circuit that this power was emanating from the Commerce Clause. Four other Justices said that this power was not available under the Commerce Clause because if it was, Congress could force people to buy things, i.e., engage in commerce. This would be more than regulating commerce which was on-going. As Justice Scalia wrote, “Upholding the Affordable Care Act under the Commerce Clause would give Congress the same license to regulate what people do not do…They gave Congress the power to regulate commerce, not to compel it.”

Chief Justice Roberts agreed that the power was not within the Commerce Clause, but it was within the power of the Taxing Clause. With his vote, the individual mandate was deemed constitutional and the Affordable Care Act was, once again, saved by his vote. Even though President Obama assured the American people that this was not a tax, government lawyers did raise this argument during the litigation.

Surprisingly, even though the Congress stated that this penalty must be paid to the IRS with the individual’s taxes, the Act forbade the IRS from using its usual enforcement tools, criminal prosecutions and levies, in collecting the tax. Also, the law allowed for some individuals to be exempt from the penalty even though they were subject to the mandate. This would be for those whose income was below a certain level and the Indian tribes.

The dissent gave several arguments refuting the notion that the individual mandate was a tax. Justice Scalia wrote “…to say that the Individual Mandate merely imposes a tax is not to interpret the statute but to rewrite it. Judicial tax-writing is particularly troubling. Taxes have never been popular, and in part for that reason, the Constitution requires tax increases to originate in the House of Representatives. That is to say, they must originate in the legislative body most accountable to the people, where legislators must weigh the need for the tax against the terrible price they might pay at their next election, which is never more than two years off.”[4]

When Medicaid was first enacted in 1965, it offered federal funding to the States to help pregnant women, children, needy families, the blind, the elderly, and the disabled to get medical care when needed. There were federal criteria that the States had to meet in order to get the funding and by 1982, every State was participating in this program. Federal funds for Medicaid have become a large part of every State’s budget; in fact Medicaid is now more than 10% of each States’ total revenue.

The Affordable Care Act expanded the coverage under Medicaid to include adults with incomes up to 133% of the federal poverty level. This was a big expansion of Medicaid and a large part of the costs for this expansion would be borne by the States. Under Federalism, the Congress could not force the States to expand the Medicaid coverage, but they hoped to coerce compliance by threatening the States with the loss of all federal funding for Medicaid if they did not expand the coverage as required under the ACA.

In addition to expanding the patient population eligible for Medicaid, the Affordable Care Act also required the States to increase the essential health benefits package. The Federal government agreed to pay the added costs of this expansion until 2016 at which time, they would decrease the payment gradually but not below 90% of the added costs. Still, the extra costs to the States would be substantial.

The States argued that these extra costs would be substantial even with the Federal payments and some wanted to opt out but they could not afford to give up all of the Federal subsidies they were already getting for Medicaid. The States felt that this penalty was coercive in nature and was forcing the States to do something the Federal government could not directly order them to do; again an unconstitutional act.

Justice Roberts agreed with the States on this issue. His vote along with several other justices severed this mandate from the Affordable Care Act. Since this severance was not lethal to the rest of the ACA, the rest of the Act was allowed to stand.

The Applicability of the Anti-Injunction Act

The Anti-Injunction Act is a law that forbids anyone from suing to bar the collection of a tax. With this law, taxes can only be challenged after they have been paid; the cause of action would be to sue for a refund. Since Justice John Roberts and the government felt that the individual mandate was a tax, then the argument could be made that the case was not yet ripe to be heard by the Courts.

In fact, the Fourth Circuit had ruled that the plaintiffs could not challenge the individual mandate until they had paid the penalty.

Since Justice Roberts ruled that the individual mandate was really a tax, he then had to explain why the Anti-Injunction Act did not apply. He dealt with this issue by referring to the Internal Revenue Code which draws a consistent distinction between the terms “tax” and “assessable penalty”. Although the IRS can assess taxes and penalties, the Affordable Care Act does not give the IRS the power to treat the individual mandate as a tax for which the Anti-Injunction Act would apply.

The dissent, having found that the individual mandate was not a tax to begin with, had no trouble concluding that the Anti-Injunction Act did not apply.

In summary, this Supreme Court case had three holdings:

States who refused to expand Medicaid were still allowed to get the federal funding that they were already getting with the original Medicaid program and this ruling allows the rest of the Affordable Care Act to stand.

This was the second time that Chief Justice Roberts saved the Affordable Care Act. Nancy Pelosi said we would have to pass the law before we could understand what was in it. I think she was right. The people and the Courts are still trying to sort things out and there are still sections of the law in litigation and other sections that are not yet ripe for suit; only time and resources will sort these issues out.

Now, with the recent death of Justice Scalia, it is unlikely that the Supreme Court will do much to stop the ACA from remaining the law. However, things may change if there is a republican president and control of the House and Senate remains in republican hands.

[1] Often referred to as Obamacare

[5] Under Article 1 section 8, cl.1, Congress may “lay and collect Taxes, Duties, Imposts and Excises to pay the Debts and provide for the common Defence and general welfare of the United States.”

One thought on “Commentary on National Federation of Independent Business v. Sebelius”