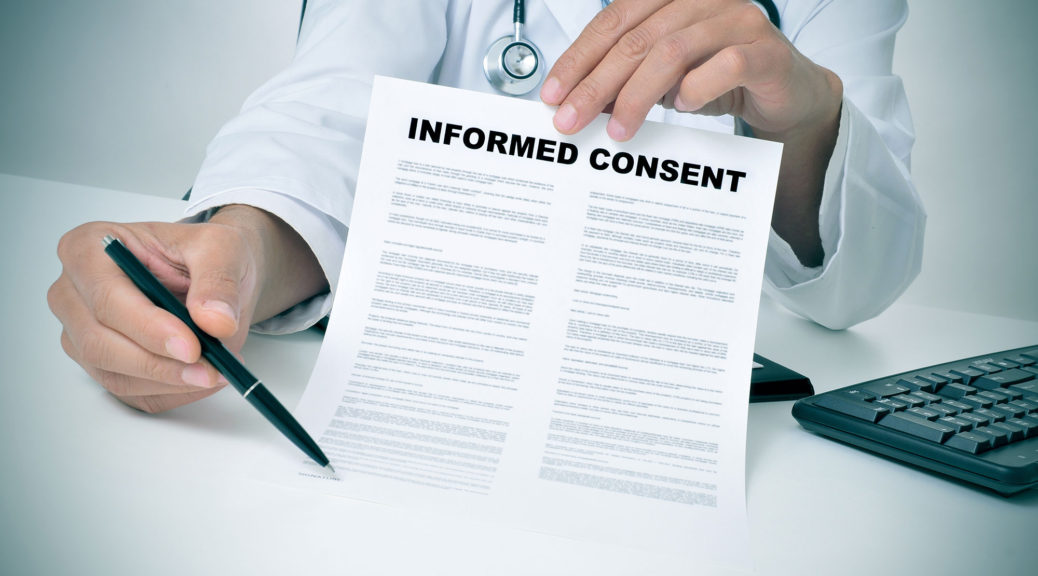 “We hold that the trial court erred by excluding expert testimony regarding undisclosed medical risks that had not materialized.”[1]

In Tennessee, informed consent depends on what a reasonable patient would need to know in order to make a reasonable decision in regards to medical treatment. The patient must be told his diagnosis or the nature of his ailment, the reasons for the proposed treatment or procedure, the risks involved and the prospects for success, and alternative methods of treatment along with the risks and benefits of such treatment. The patient must also be told if the treatment is considered to be experimental.

The informed consent standard used in Tennessee is the “objective patient” standard and this is the same standard used in the 1992 Code of Medical Ethics used by the American Medical Association.  Only the practitioner is competent to explain the goals, risks, and benefits for the particular patient. This process cannot be delegated to another person.

A recent decision of the Tennessee Supreme Court, Ike White v. David Beeks, M.D., has threatened to turn this consent process on its head.

Facts of the Case

Ike White, a 19 year old, had chronic back pain related to a fall down a flight of stairs, injuries suffered while lifting a 200 pound car transmission, and injuries incurred in a three-wheeler accident.

In May 2006, Dr. David Beeks operated on Mr. White’s lower back; the discs were fused to stabilize the spine. To help with the stabilization, a bone grafting product, “InFuse”[2], was used.

Although Mr. White’s pain improved after the operation, it recurred about six weeks later. An evaluation of the pain showed that ectopic bone[3] had formed at the spinal stabilization site.

On July 6, 2007, a health care liability suit was filed against Dr. Beeks. The suit alleged that the InFuse caused the ectopic bone growth which put pressure on the nerves in Mr. White’s back. Mr. White testified that Dr. Beeks had never discussed the risks associated with InFuse, and, in fact, had never even used the words “InFuse.” Mr. White said that alternatives to InFuse were not discussed nor was the risk of not using InFuse to help with the fusion.

Mr. White’s medical expert, Dr. Melvin Law, testified that “Dr. Beeks should have described the relative advantages of InFuse, the complications associated with its use, the potential to increase the chance for a successful fusion when using InFuse versus not, and the manner in which InFuse would be used”.[4] Plaintiff’s expert also testified “that Dr. Beeks should have disclosed to Mr. White that the main risks of using InFuse were nerve pain, irritation, and ectopic bone growth.”[5]

During the trial, the Court granted a motion which limited the Plaintiff’s expert’s testimony to only the risks of InFuse that allegedly occurred and caused Mr. White’s injury.

The jury came to the conclusion that the injury was not related to the InFuse since there was undisputed testimony that ectopic bone formation had never been shown to result in neurologic injury for this type of case. Even if InFuse had caused the ectopic bone growth, the pain was not due to this bone deposition.

After the jury verdict, the Plaintiff appealed, arguing that a new trial was warranted because the trial court erred in not allowing Dr. Law’s testimony relating to risks that had not occurred in this case. The plaintiff made the argument that he would never have consented for the procedure if all of the significant risks had been disclosed; including the ectopic bone formation.

The Appellate court agreed with the trial court but the opinion was divided. The Tennessee Supreme Court took the case and ruled for the Plaintiff. The Tennessee Supreme Court wrote, “[A] physician would be liable to a patient for injuries resulting from a procedure, “regardless of whether such injuries resulted from negligence or otherwise” when informed consent had not been obtained.”[6]

The Court ruled that this error, more probably than not, influenced the jury’s verdict. As such, the plaintiff was awarded a new trial.

The bottom line is that the physician must make a “full disclosure” of any facts necessary for a patient’s “intelligent” consent for a proposed treatment. Obviously, the term “full disclosure” is open for interpretation. With this holding, it will be difficult, if not impossible for the clinician to go over every “material” complication associated with a procedure, especially if medical devices are to be used.

It will take time for the Court to clarify this holding. In the meantime, plaintiff’s attorneys in Tennessee are likely to include an “informed consent” theory in future medical malpractice cases.

[2] InFuse is a human-engineered protein which stimulates bone growth. This ectopic bone is supposed to help in the fusion process.

[3] Ectopic bone is bone that presents at an abnormal site.